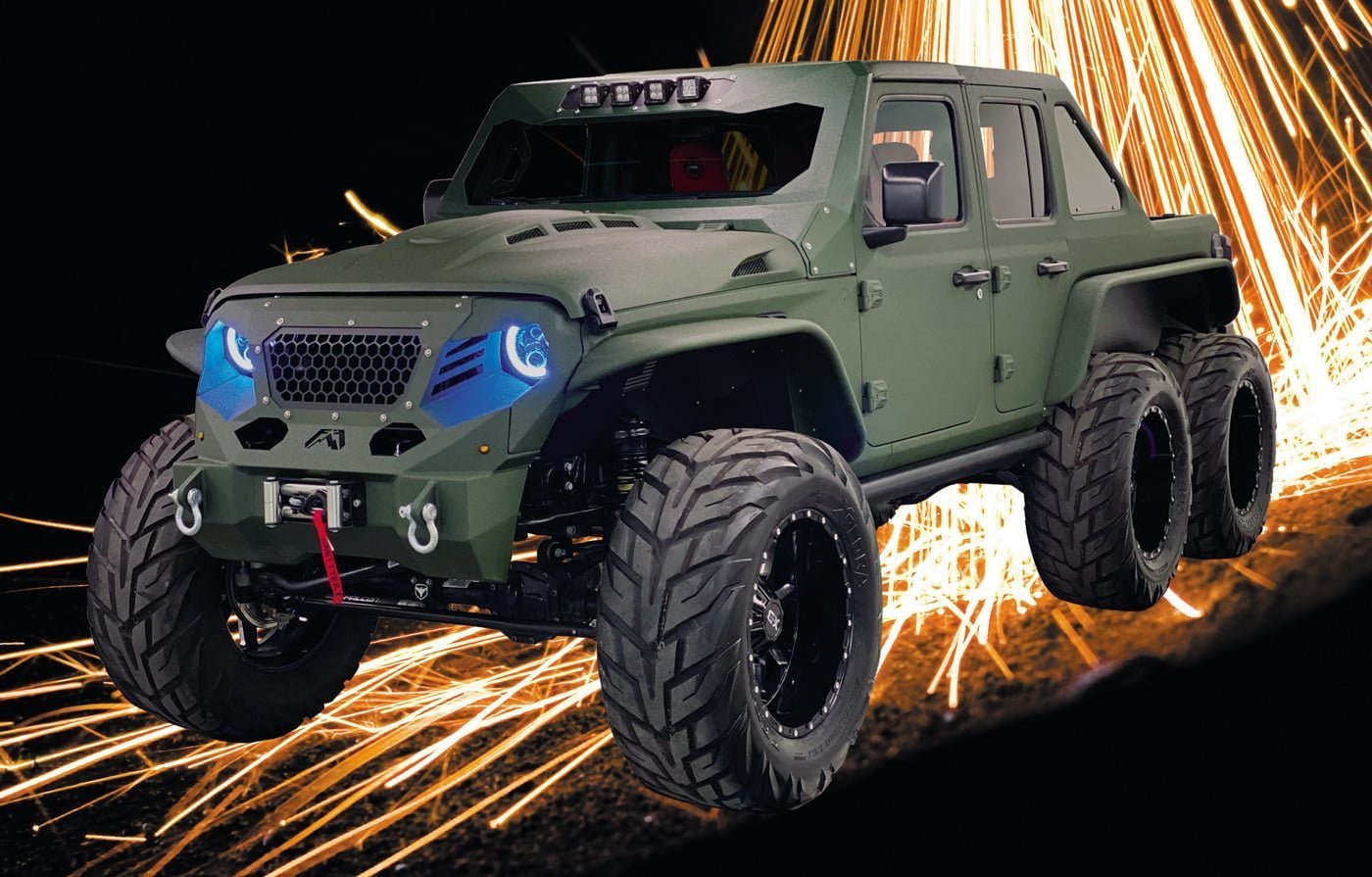 Open your eyes in South Florida and tilt your head to the roads of I-95. What you will see is the densest concentration of the world’s most stunning superpowered, high performance vehicles. From Palm Beach to the Magic City of Miami, it has become all too commonplace to spot luxurious brands like Ferrari, Lamborghini, Mercedes, Bentley, Rolls Royce, Aston Martin, Maserati and McLaren’s. These designers used to command second and third glances, people literally stopping in their tracks to gawk, unfortunately for the owners who paid such a high price to become the center-of-attention those days are long gone. A revolution has begun, South Florida now seeks something bigger, something better, something discernable in the crowd, a rare indigenous jewel to call their own.

For over 8 years the talented customizers at South Florida Jeeps, or better known by its moniker of So Flo Jeeps, have used their innovative concepts to not only break the mold, but make their own molds. Out of the imagination of these modern-day Michelangelo’s, was forged a new breed of automotive animal.

Introducing the half electric, half turbo-diesel SF6x6. This behemoth mocks the passersby trying to ignore it. It doesn’t stand out of the crowd, it runs over it with its completely-powered, six 40-inch tires. The design is unapologetic and aggressive. Confused often for a military tank at a quick glance, rubberneckers fully expect General Patton to emerge from its doors.

The SF6x6 doesn’t just talk the talk, it walks the walk. Built with the intent to be unstoppable and conquer not just the interstate but the unique and challenging terrains of Sunshine State. Features include full time 6-wheel drive, created by re-gearing and reassembling five-thirteen axels, especially the middle axel which is outfitted with a Detroit true track locker using a 9-inch differential. Power explodes out of all three axels, different than fake 6-wheel inventions where only two or four out of the six are actually moving. Not the SF6x6, its custom handmade differential allows power to pass in and out, as there are no moving mechanical parts to slow it down, simply a solid unbreakable shaft that maximizes energy. Oh did we mention the electric charge comes from a Tesla battery? Want only four wheels to do the job? No problem as the truck has a quick switch, on-the-fly shift from 6-wheel drive to 4-wheel drive and vice versa.

There is truly nothing else like the SF6x6’s suspension system, an extraordinary 5-inch premium lift with Falcon shocks and 14 inches of travel in each axel, where a driver can effortlessly hit 90 mph on the highway and not be all over three lanes. This is because of two main reasons. One – under the custom-made fiberglass, dent and rust resistant predator hood is a 3.0L turbo diesel engine that propels the street-legal monster truck with 700ft/lbs. of torque.

Step on the gas and watch as its sheer power spins all four rear tires. Two – the vehicle sits atop six 40-inch Patagonia tires with 15 ½ inch wide, center riding tread. This quiet, ride-on tire was thoughtfully selected to enhance its Falcon Steering Stabilizer and improve turn ratio (full U-turns not a problem here) ideal for everyday use, while rising to take on any off-road challenges (mountains, desert, waterbodies are no match). Additionally, because of the truck’s six all-moving tires and its relative light total weight (only 6,000 lbs.) it is un-stuckable. Soft mud, dirt, sand, heck, a swimming pool full of ball-bearings are all trekked thanks to the displacement of six tires that refuse to sink.

Built to take abuse but with all the looks of a Hollywood action-star, the SF6x6 is larger than life. However, even with its massive presence, it’s almost unfathomable to think the SF6x6 is approximately the same length as a Ford F-250, so leave your tail-sticking-out-of-your-parking-spot nightmare back in the bedroom. Its exotic visuals are highlighted by special add-on after special add-on, including a front-end steel grumper complete with a built in 9,500 lbs. winch ideal for grappling. Stylish custom fenders, as well as a back sweep gives it that perfect profile, while the handmade truck-bed can handle whatever you throw at it.

LED headlights, color changing Halo lights, as well as light bars throughout the interior and rock lights on the undercarriage, that make the whole suspension glow, are operated by an easy to use custom switch panel next to the dash. Further adding to the excitement is the fact that all doors and tee-tops are removeable, while power steps are activated as soon as a door is opened to allow for easy access on and off. Comfort wise it doesn’t get any better with an all hand stitched, weather resistant leather interior, that give customers the option of not only selecting their color but also add their name, pattern or business logo to the headrest.

To finish off the leviathan, a three-part epoxy, scratch-resistance coating is mixed with Kevlar fiber to create a resilient, hard cover that’s 1/16 of an inch thick. In total, 20 gallons of this special material is cascaded over the SF6x6, thus eliminating the need for waxing or buffing, just hit it with a power washer then hit the road.

Something you don’t see that you want added, no issue So Flo Jeeps has you covered, because custom is what this team is all about. 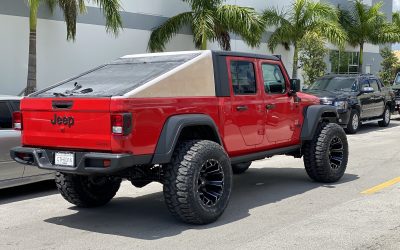 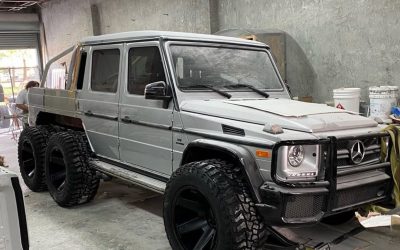 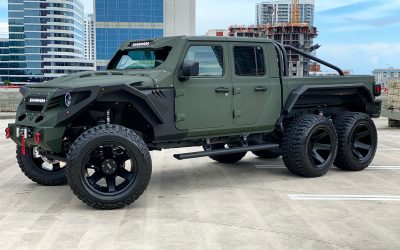 The SF6x6G, Our exclusive Jeep Gladiator 6×6

So Flo Jeeps SF 6x6G. This behemoth starts by taking a brand new 2020 Jeep Gladiator and literally cutting it in half...